In La Crosse , Wisconsin , USA , the Dairyland Power Cooperative doesn't take chances. Manager David Rybarik, like the heads of thousands of other maintenance engineering departments across the USA and Europe , knows that an unscheduled outage will cost him and his customers - possibly millions of dollars. So Rybarik practices predictive maintenance the best way he knows how: with Environment One's Generator Condition Monitor, which, along with the company's Gen-TagsTM innovation, gives him the assurance that his generating assets will perform safely and reliably and, should anything go wrong, enable his department to prevent a potential catastrophe.

Corrective action prompted by early warning of generator overheating can mean the difference between a brief shutdown for minor repairs and a major overhaul involving weeks or even months of costly downtime.

To provide very early warning of generator overheating or "hotspots," Environment One (E/One) pioneered the development of generator condition monitoring. In more than 1000 applications worldwide, the Generator Condition Monitor (GCM) has offered operators the opportunity to take action if and when a critical situation occurs. The Dairyland Power Cooperative is one of the customers that has relied on E/One generator condition monitors since the early 1970s.

During its three decades of leadership, Environment One has refined condition monitoring technology and with the design of the GCM-X has taken a major step forward in predictive maintenance for hydrogen-cooled generators.

GCM-X, also known as the Generator Condition Monitor-Explosion-Proof Design, builds on years of field experience in the power generation community and provides a high degree of safety, performance, and reliability. Microprocessor-based electronics, a flameproof, intrinsically safe design (Ex, IIC, CE), and self-diagnostics make this extraordinary condition monitor not just ahead of its time, but of immense value to any utility that needs to protect its hydrogen-cooled generating assets. 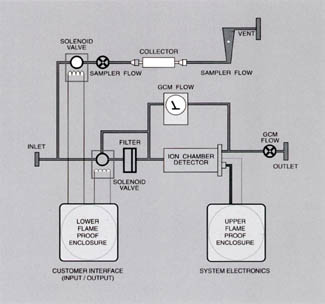 High concentrations of submicron particles (pyrolytic products) are produced whenever any materials within the generator are heated sufficiently to produce thermal decomposition. These "hotspots" can lead to catastrophic failure if not detected in a timely manner.

When they are present in hydrogen, pyrolytic products are quickly detected by the sensitive ion chamber of the highly engineered GCM-X. In fact, the GCM-X warns of impending failure faster and more reliably than temperature sensors such as RTDs or thermocouples.

If an emergency situation occurs, the GCM-X microprocessor initiates and monitors an alarm verification sequence upon detection of hotspots. If the alarm is confirmed, a verified alarm indication is given; alarm contacts are switched; and a fixed amount of the hydrogen flow automatically passes through the sampling systems. Particles are then collected for laboratory analysis to determine their source. Alarm confirmation is quickly made by the automatic alarm verification circuit, which activates the solenoid valve in the filter/solenoid valve assembly. All the hydrogen then passes through the filter, which removes the submicron particles. If the alarm is valid and thermally produced particles are present, their removal will cause the collector current to return to its normal level, confirming the presence of pyrolytic particles and the existence of overheating.

Maintenance engineers responsible for monitoring hydrogen-cooled generators can add even greater value to the GCM-X by combining Gen-TagsTM and a regular analysis program.

Gen-TagsTM help locate hotspots and our collector analysis program qualifies the nature and source of an alarm.

According to David Rybarik, Gen-TagsTM, also from E/One, complement the capabilities of the GCM-X, providing even greater value and functionality by helping locate generator hotspots. Rybarik uses Gen-TagsTM on at least one of Dairyland's operating units. These specially synthesized, chemically and thermally stable compounds are applied to critical areas of the generator so that areas of overheating can be identified during sample analysis by the GCM-X.

Gen-TagsTM can be applied during manufacturing of new generators or can be retrofitted to units on site during scheduled maintenance outages.

Environment One's Collector Analysis can be used in conjunction with Gen-TagsTM or independently to provide valuable data to support a predictive maintenance program. The Collector Analysis program further verifies a GCM-X alarm and qualifies the nature and/or source of the problem. A tracking program can be initiated and maintained for each generator on site; a background sample establishes a baseline and additional samples can be collected every six months and analyzed to determine any deviation from the baseline (figure 3) .