Elwood, Kansas, sits in the northeast corner of the state, just across the Missouri River from the city of St. Joseph. It's a residential and light commercial town built on alluvial sand soils deposited over thousands of years. Today the system is one of the largest gravity sewer replacement projects in the United States.

In the early 1990s, the old gravity sewer system was barely functional because of groundwater infiltration in the deeply dug system, 15 to 20 feet in some places. The nine lift stations ran around the clock just to clear the groundwater. Manholes and sections of main were constantly sinking, and it was clearly a disaster waiting to happen. 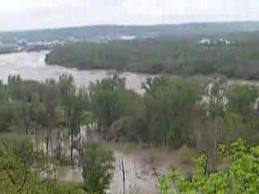 Then came the great flood of 1993. In late July that year, levees protecting Elwood were breached, and the entire town was washed out. The soft, sandy soil became a porous, shifting hydrography that destroyed many structural foundations and most conspicuously, the ailing gravity sewer.

The Federal Emergency Management Agency (FEMA) helped Elwood dig out and patch up its severely compromised sewer. With funding from FEMA, the entire system was videotaped and shown to be nearly beyond repair. At this point plans were laid to rebuild with a more sensible solution for this vulnerable area.

The city of Elwood hired Bartlett & West Engineering of Topeka to draw up plans for re-sewering.

"We had used [the firm] for our new water main, so we had a good working relationship," said Elwood Public Works Director Bobby Hall.

"The mayor and I visited nearby Wellsville, where they had just installed an Environment One low pressure sewer system (LPSS)," Hall said. "That's where we first saw that technology."

The city decided to install a low pressure sewer system after a review of the capital and operation and maintenance (O&M) costs.

A grant from the USDA Rural Development Agency was secured to fund the project. John Bellerive of Haynes Equipment Co. of Olathe, KS, said the new system was installed in two phases. The first phase, installed in 2004, consisted of 235 simplex and 10 duplex grinder pump stations. The second phase, completed in 2008, added another 136 simplex and three duplex units of E/One's 2000 Series grinder pump. Today the system has approximately 384 grinder pumps in operation.

At each home or business site, an grinder pump station is installed into the ground, with an access lid for service. These pumps - smaller than a washing machine - grind the waste into a fine slurry and pump it under pressure into small diameter pipes that lead uphill or horizontally to an existing sewer main. Because of the pressure generated by the pumps, they are able to lift sewage nearly 150 feet vertically or up to two miles horizontally.

It is a closed system for wastewater only, immune to groundwater infiltration and runoff, which historically was the problem with Elwood's deeply dug, traditional gravity system. And, because the pipes are significantly smaller than 24 inch gravity mains, the installation was far easier in established neighborhoods.

Elwood has been operating the new system for several years, and reports a good track record with few hiccups. Most notably, they've experienced some pump failures due to grease.

"This is a situation of user awareness," Hall said. "There are a few multi-unit apartment houses that appear to be dumping grease down the drain. We need to inform the tenants and landlords of the importance of minimizing grease wastes."

It's important to note that in any type of sewer system, grease waste can also clog lift stations and sewer lines, potentially causing major system problems.

On the plus side, Elwood's Public Works Department has largely taken on pump repair themselves. Typically when a pump has a problem, the entire core is replaced in the field, the switch-out requiring only one person, and thereby minimizing downtime. Back at the shop the pumps are easily repaired and put back into service. Any warranty issues are handled by Haynes Equipment.

"We're always here for Elwood," Bellerive said. "But by and large, they've become pretty self-sufficient with running and maintaining the system."

Elwood features such flat topography that its old gravity system required extreme depths to maintain a downgrade. This, in turn, created groundwater inflow problems. With nine lift stations pumping groundwater inflow around the clock, a breakdown of a single station had a catastrophic effect, as the entire system then backed up.

Between the electricity to run the lift stations and the repairs, the old gravity system was literally sending money down the drain.

With the new pressure system, there is a dramatic shift in resource allocation. The grinder pumps run for shorter durations and the closed system doesn't allow groundwater infiltration, so there are no more infrastructure collapses of roadways, mains, or manholes. Overtime is a thing of the past, as grinder pump cores can be replaced during the regular workday.

"We've had some pump failures," Hall said. "But we're able to replace the core quickly and do most of the repairs ourselves. As discussed earlier, a majority of the pump failures are a direct result of grease introduction into the system, which is a homeowner and renter education issue."

Hall anticipates fewer problems as residents come to understand that grease shouldn't be disposed of in the sink.

Elwood's sewer system terminates in a three-cell non-mechanical lagoon, so there haven't been savings on the treatment side, as there are no expenses associated with it. However, Hall notes that the treatment is much faster due to the smaller particulate size, and the ability of the slurry to biodegrade and settle out more quickly.